The solution to the smart industry rests in gathering information and data, making industry sensors the nerve endings of the intelligent industry. Nowadays, plants use a wide selection of industrial sensors, each with a unique design and application to collect valuable data and give you the fundamental data support for intelligent industry construction.

At the same time, with the fast growth of smart manufacturing, Industry 4.0, and the Internet of Things (IoT), the application requirements just continue to rise. Smart sensors that gather initial data are swiftly iterating and upgrading, navigating the smart revolution of industrial internet terminals. 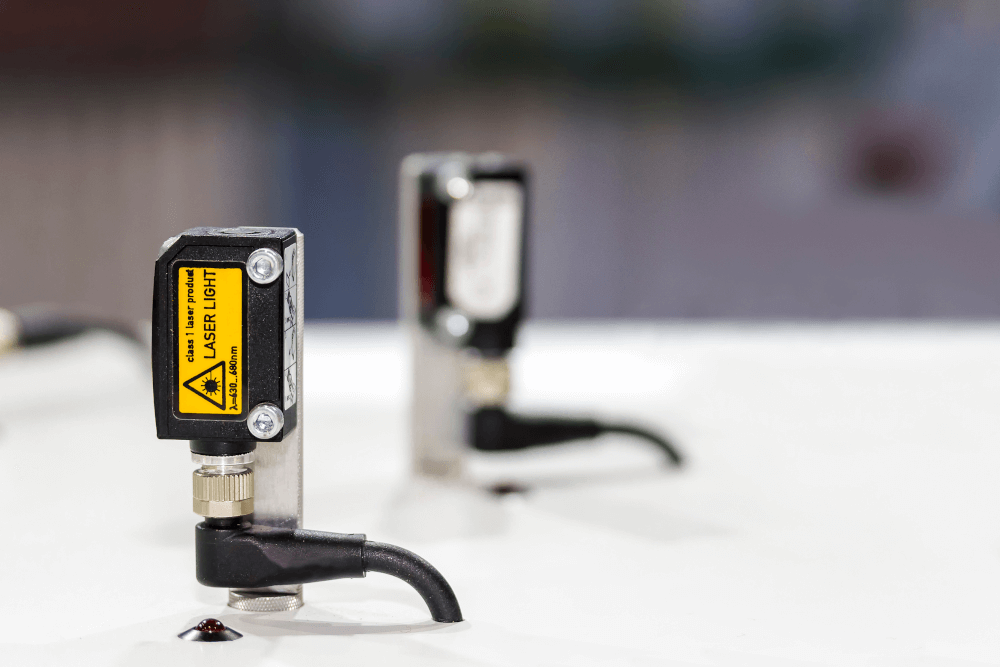 Sensors/Detectors/Transducers are all electronics or electrical devices. These distinct electronic sensitive materials detect, measure, and sense alterations in the position, temperature, displacement, electrical current, and many different factors of industrial equipment.

Sensors are deemed the most fundamental components to acquire data and measurement instruments in the present state of factory operations. Several sensors, transducers, and detectors are available to detect the physical presence of chemicals, metals, levels, flame, gas, or leaks.

Some are designed to see motion or proximity or sense tangible properties. Additionally, several technologies are used to achieve these objectives, including inductive, capacitive, magneto-resistive, ultrasonic, and optical pressure.

Industrial sensors are devices that react to any physical quantity such as magnetism, motion, sound, heat, light, pressure, etc. It is then converted into electrical signals, with the sensor’s output signal being magnetic, electrical, mechanical, etc.

The most unique thing about industrial sensing is the kind of applications and environments they are used in. These sensors must pump out under challenging conditions, including harsh and inaccessible environments, such as vibrations, high humidity, high temperatures, etc.

Almost every environmental process or situation calls for some or the other type of industrial sensor. These sensors let people process, monitor, and examine a vast array of changes that occur on an industrial manufacturing site, like security, pressure, altitude, motion, external, temperature, and lots more.

How to Select Industrial Sensors

There are various factors worth considering before you choose an industrial sensor. They are as follows:

Types of Industrial Sensors and Their Applications

Factories are looking for ways to make the most of their throughput and performance. Presently, they have also been directed to reduce the negative impact on the surroundings. The best way to implement this is through the systems and sensors utilized in industrial automation. With that said, here are the top types of industrial sensors and sensor applications in the industry:

Temperature is a commonly measured physical parameter in industrial production, and many sensors can be used for measurement. A temperature sensor gathers data about temperature from the environment and changes it into specific values.

They measure the thermal aspects of solids, liquids, and gases in many process industries and constitute particular and general-purpose uses.

Humidity and temperature sensors and digital temperature sensors are the most frequently used industry sensors in industrial automation. The latter's sampling card has a standard RS-232 or 485 communication interface and a 10-digit dual-channel successive approximation A/D converter.

After circuit processing, they’re converted into voltage or current signals linearly related to humidity and temperature. It can also be passed straight via the main control chip.

Another common type of industrial sensor is a level sensor, a device used to measure, monitor, and maintain the level of liquids and sometimes solids in a vessel, tank, or container used as part of a system or a process. This device helps determine the level of liquid flowing in an open or a closed system.

On the other hand, the point-level sensor determines whether the level of the fluids is high or low. Level sensors can be classified into hydrostatic, laser, float, optical, ultrasonic, capacitive, resistive, and electromagnetic.

You can find multiple kinds of level sensors in industrial process control systems and settings. This selection depends upon the type of solid or liquid being monitored, how much access is available to the solid or fluid, and its properties. They appear in products recognizable to consumers and are used in several other applications beyond industrial facilities.

The two sectors where a level sensor is mainly used are manufacturing and automobile. Still, it is found in various household appliances such as ice-makers in the refrigerator, washing machines, or wherever it is essential to keep fluid levels from overflowing excessively or being too high.

The water heater helps replenish the water when the inner water tank’s fluid level reaches a certain point and is too low. In addition, the toilet needs to reserve some water in the tank for leakage or fluid level identification.

A pressure sensor consists of a signal processing unit and a pressure-sensitive element. It enables you to sense the pressure signals and convert them into a usable output electrical signal per a specific rule. They are primarily used when data about liquid or gas pressure is required for measurement or control.

You can oversee the pipelines using a pressure sensor and send unusual leaks or alarms to the central computing system to remind the administrations that maintenance and repairs are needed.

Motion sensors determine if objects have moved from their original place. They can measure the movement indirectly by assessing changes in pressure or a magnetic field. It is mainly used in security systems to instantly trigger remote alarms and trigger lights. It can be classified into passive, gesture, active, and tomographic motion sensors.

An infrared sensor is used for processing information using infrared and is often referred to as infrared light. It contains reflection, refraction, scattering, interference, and absorption properties. Any substance can emit infrared rays provided it has a specific temperature above absolute 0.

The infrared sensors aren’t in direct contact with an object at the time of its measurement. As a result, there’s no friction, providing you the benefits of high sensitivity and swift response. The infrared sensors drive the device’s operation. They are mainly utilized for non-contact temperature measurement, gas composition analysis, and non-damaging testing.

An infrared sensor is mainly used in space technology, medicine, environmental engineering, and the military. Adopting infrared sensors with Industrial IoT (IIoT) solutions is also used in several other sectors.

Proximity sensors can sense the closeness of objects and detect their presence within a range of up to several millimeters (mm). While doing so, they produce a DC output signal to controllers. This type of sensor is used in many manufacturing operations to identify machine parts and components.

The sensitive character of the displacement sensors allows you to identify the proximity of an object and yields the matching switch signal. This sensor can also carry out non-contact sensing directions. As a result, it will not destroy or wear out the detection object. Moreover, there is no spark or noise.

Being a non-contact output mode, it has an extended service life and does not affect the service life of the contact. A proximity sensor is distinctive from other detection methods. They can also be used in water and oil settings. In addition, they won’t be affected by the water and oil stains of the detection object.

On their own and amidst them, metal objects can only be located without contact and at a close distance. The most essential feature of the variable-range flexible rod apparatus is that it can burden the sensing range of the contact.

Spring-loaded pistons, probes, and buttons are typically used to contact the product and detect if it is in place, has an accurate position, and confirms that the product is being tested. Proximity sensors can be classified into inductive, optical, capacitive, magnetic, and ultrasonic.

A proximity sensor is prevalent in aerospace technology, aviation, and industrial production, where it is used to identify the displacement of objects. In our daily lives, hotels, garages, restaurants, automatic doors, and automatic hot air blowers all comprise the applications of proximity sensors.

Optical sensors are based on visual principles for assessment. It has many benefits, including non-contact and non-destructive measurement, remote control, practically no interference, and high-speed transmissions.

Gas sensors help in identifying the changes or presence of various gases. They’re inevitable in chemical industries as well as for certain manufacturing plants. Using a gas sensor, you can easily determine the presence of toxic or combustible gases. There are different kinds of gas sensors you will come across, including oxygen, carbon dioxide, and nitrogen oxide sensors.

Primarily, gas sensors are used in the chemical, paint, oil and gas, petrochemical, and manufacturing sectors.

The micro-electro-mechanical systems (MEMS) sensor is a comparatively new sensor created using the technology of micromachining and microelectronics. MEMS sensors are different from conventional sensors.

They have high reliability, a small size, and low power consumption, making them perfect for mass production. The featured size on the order of micrometers allows it to perform functions that other conventional mechanical sensors cannot achieve.

As an essential device for obtaining valuable information, MEMS sensors have played a pivotal role in miniaturizing several sensing devices. They are primarily used in space satellites, launch vehicles, cars, aerospace equipment, and aircraft. Moreover, MEMS sensors can mainly be used in medicine and consumer electronics.

The smoke sensor is ideal for fires as it can detect a substantial amount of smoke that arises during a fire. It instantly sends out an alarm signal just in time. Smoke detectors implement MCU control which intelligently measures the smoke created during the fire and the alarm.

It’s an indispensable sensor in a flammable and explosive industrial manufacturing setting. If you integrate it with IIoT solutions, even the smallest amount of fire or a gas leak can be reported to the team in charge, thus preventing huge disasters from occurring.

Smoke sensors are prevalent in heating, ventilation, air conditioning (HVAC), construction site monitoring, and industrial units where there is a significant chance of fires and gas leakages.

Sensing a fuel level in a tank can be achieved through many different sensors. The types of sensors are quite renowned among most subcategories. For example, you can use infrared sensors for level sensing, flame detection, etc.

Most sensors have their response time assessed in mere milliseconds. In contrast, sensors' response time for gases, leaks, etc., might be calculated in seconds or minutes.

Choosing an intended application aids in narrowing down your choices of sensors for specific cases. For example, proximity sensors for pneumatic cylinders are designed to fasten directly to the cylinder’s tie rods and have specific mounting arrangements.

Sensors are essential to smart industries, smart devices, and the Internet of Things. The development and realization of the industrial internet cannot be separated from technological innovation and the extensive application of sensors. Still, it has brought a massive market for the growth of sensors.

Suffice to say, industrial internet and sensor development can be stated as complementary. The requirement for automation and industrial sensor technology differs between businesses.

Consequently, comprehending the ease, difficulty, and cost of integrating sensors into an existing system and the outcomes of an emerging workforce can help you decide if it is suitable for you to switch to industrial sensors.

Moreover, it’s always a good idea to consult your local automation-engineering firm to learn about technologies that boost your production manufacturing facilities’ profitability and operational efficiencies.