The Ultimate List of Belt Conveyor Components and Parts

If you happen to use belt conveyors in your facility or operations, you can make it a lot safer, productive, eco-friendly, and more likely to comply with all applicable regulations. There are a plethora of ways to enhance your belt conveyor system’s performance with the correct belt conveyor components.

This comprehensive guide provides you the ultimate list of belt conveyor parts and components to help scale your operations even further. But first, let’s look at what belt conveyors are, their different uses and industrial applications, and the different kinds of belts for conveyors available for use. 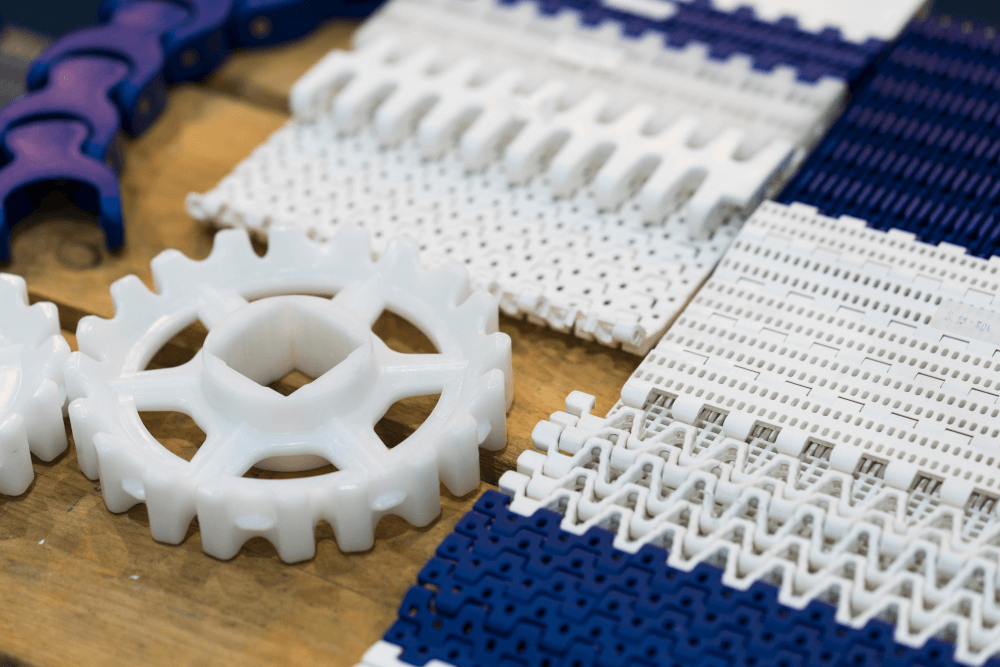 Due to its simple construction and design, power-driven belt conveyors are relatively easy to install. You might come across both lightweight models to heavy-duty styles of belt conveyors. While this conveyor system has endless variations, most of them are relatively quite simple.

You can implement belt conveyors for a vast array of industrial and warehouse applications with a very reasonably priced cost per foot of the conveyor. It is relatively simple since it includes just a simple belt system and one conveyor motor .

Thus, a belt conveyor system is often one of the first-ever productivity enhancements an up-and-coming company will likely invest in. Even though there are several types of conveyor belts available in the market, the most straightforward style is called a slider bed style.

When combined with sensors and a few other automation equipment, belt conveyors can significantly boost efficiency and productivity. On the downside, belt conveyor systems are generally just used for transportation applications, indicating that the conveyor belt system only moves products from one point to another.

While this might be sufficient for most facilities, a belt conveyor system is usually unable to buffer or accumulate the components. Moreover, they aren’t typically utilized as a working surface for the production personnel.

This is why it's essential to understand the pros and cons of belt conveyor systems to determine if they will be the right conveyor equipment for your operations.

If you're thinking of investing in conveyor belt equipment for your production line, it is vital to choose one that best matches your company's requirements. The right belt will effectively streamline your assembly line, boost profit margins, and contribute to your company's bottom line and growth in ways you may not be able to initially envision.

To make an informed and well-thought-out purchase, you must know the different belts for conveyors available. Here are the 7 basic kinds of conveyor belts.

A flat belt conveyor is beneficial for conveying items internally, i.e., within the facility. It uses a series of motor-driven pulleys to move a constant flat belt, consisting either of synthetic fabric or natural material.

Items can be placed atop the rotating belt and transported from one location to the other. Flat belts can be composed of different materials, making them the most versatile.

Unlike a flat belt conveyor that uses a single, constant loop of material, a modular conveyor belt uses a single loop composed of multiple interlocked pieces. They are typically made of hard plastic.

You can remove or replace the segments individually instead of getting rid of the entire belt. They are relatively easy to wash and more resistant to coarse and sharp materials. As a result, modular belts are easier to repair and maintain than flat belt conveyors.

Modular belt conveyor systems are best suited for applications that involve traveling straight, going around corners, and inclines or declines using the same motor and a single belt throughout. While other conveyor systems can also do this, additional costs and customization are required.

Roller bed conveyor belts’ surfaces comprise rollers that are selected to correspond with specific product requirements. This includes the required speed or weight of the products moving along the belt.

A shorter conveyor belt may be composed of just two rollers. Still, additional rollers will be required for the belt to operate if there is a long distance between the two ends. Roller bed conveyors are ideal for when objects are loaded with gravity.

They are suitable for conveying materials over extended distances as they minimize friction. Thus, it becomes relatively simple for products to move along the belt.

Curved belt conveyors use a curved design to transport items around corners, optimize floor space, or make tight transfers. The curves of these belts can reach up to 180 degrees.

Cleated belt conveyors contain upright cleats or barriers. These cleats can keep loose materials safe during ascents and drops to offer consistent gaps between them and much more. These cleats come in various shapes, each with its own applications. Some types of cleats include:

An incline belt conveyor includes a gear motor, center drive, and take-up with one or two noses. It has a rough surface, unlike other belts with a smoother surface. This makes them perfect for transporting items up or down.

Many other kinds of conveyor systems are custom-made for diverse applications. However, they aren’t as prevalent as the former types. These include:

Every conveyor system, including a belt conveyor, has three primary components: the drive unit, the pulley, and belt support. They play a massive role in conveyor equipment function. While these three components are a part of all conveyor systems, the designs tend to differ in the construction materials and where each part is situated.

The belt support is the part of a belt conveyor that ensures the smooth movement of the belt. If the support unit is unstable, the belt will sag if any heavy object is placed on the top. This sagging of the belt refrains it from moving as swiftly and smoothly as it should. By using a firm support unit, you can maintain the belt’s tautness and ensure it keeps running efficiently.

The drive unit of a belt conveyor system is the part that powers it and enables the conveyor to move. It refers to the motor or the assembly which mounts the motor to the equipment. Hence, it is sometimes also referred to as the drive assembly. Conveyor drives also comprise a counter bearing that allows the efficient movement of the parts.

The pulley system is an outer part that controls the movement of the belt. Each conveyor unit, including a belt conveyor system, comprises at least 2 pulleys. One is an idle pulley, and the other one operates under power.

More complex conveyor equipment may incorporate additional rotors throughout the conveyor frame. You can choose from an array of motorized and non-motorized pulleys and pulley accessories and parts.

There are many ways to enhance a belt conveyor’s performance with the right accessories and components. If you wish to minimize power costs and operating costs, boost the health and safety of your workers, and lower your belt conveyor’s maintenance costs, you need to look for the right approach with the conveyor belt parts and accessories.

The process of carrying bulk items on belt conveyors sometimes or always leaves behind residual material clinging to the belt, called carryback. It eventually falls from the belt when it is on its return run. This carryback builds up in heaps under the belt, causing build-ups on the conveyor structure, pulleys, return idlers, excessive wear, resulting in belt misalignment and more significant power consumption.

Carryback is associated with serious accidents and poses an adverse impact on your plant efficiency and conveyor operations. Carryback cleanup can be costly, dirty, time-consuming, and dangerous. Luckily, with the right belt cleaner system or belt scraper, this problem can be eliminated.

Low-cost protection for the belt and tail pulley will keep damage from pieces of fugitive materials or stray conveyor parts like idler rollers, tramp iron, or cleaner blades getting stuck between the pulleys and the belt. Diagonal and v-plow cleaners are effective for this use. They easily direct the unwanted dirt or material from the belt.

Wash box systems help remove residues from belts. They are usually used in applications with regulations, environmental concerns, or scenarios requiring the highest efficiency in belt cleaning. To make the most of the cleaning process, you may substitute the water in the wash box with an antifreeze or dust suppressant chemicals or a cleaning solution.

Conveyor belts that mistrack information can lead to component failure, costly damages to the conveyor structure and belt, more significant power consumption, and material spillage. A belt that runs to one side can significantly minimize its service life as it tends to abrade one or both edges, fold over on itself, or become stretched.

When a belt meanders, it might run against structural members or steel chutes until the steel structures, other components, and the belt itself is damaged, often beyond repair.

The trivial belt behavior concerns can be corrected by installing these mechanical belt alignment devices. These will help steer the belt back into the structure’s center. However, it is better to detect the real issue and make adequate corrections to prevent gross misalignment.

Conveyor safety systems, motion controls, and zero-speed switches determine when your equipment is working below or above the desired speed and aid you in actuating the rotating shaft. They can shut down rotating equipment to prevent damage or send out an alert for underperforming conveyors. This will warn the operator to boost the RPM.

OSHA, ASME, and MSHA Regulations claim that a backstop or a holdback device should be installed on the vertical, decline, or incline conveyors where the effect of gravity will allow the cargo to slide/lower uncontrollably in the event of a gearbox or motor breakdown.

This may potentially be hazardous for the workers. Holdbacks are fitted directly on the drive pulley’s shaft. This will give operators dependable protection against injuries, ruined equipment, and flooded load zones due to unwanted belt reversal.

They are mainly available in undamped and damped variants and can be mounted to the side between transporting lines or centrally. A damped conveyor stopper enables you to gently slow down the initial workpiece carrier and keeps them from slipping off in a particular place. You can select from multiple stroke heights based on your customers' requirements.

If you wish to ensure a long service life for your belt conveyor system, you must ensure your belt conveyor is equipped with a stainless steel plate. This particular design has become the industry standard and is prominent for its high wear resistance.

Conversely, you can opt for a belt guide if the belt is to be driven laterally. This is standard for timing belt conveyor systems. This is only suitable for belt conveyors in exceptional cases.

The following add-ons are mainly intended for conveyor setups on an even level.

A fastening plate is a supporting module that allows inclines of about 20° to be regulated constantly.

Belt support helps to keep the conveyor belt from drooping into the lower end. This add-on module is highly recommended for free-hanging stretches that are longer than 3,000 mm.