Robotics and automation are hot topics in business technology. Even though the two terms are quite similar, it is not always suitable to use them interchangeably. Before you consider opting for each of these modern-day technologies to revolutionize your business, you need to understand the practical meaning and conceptual differences between them and which would be most beneficial for your business. 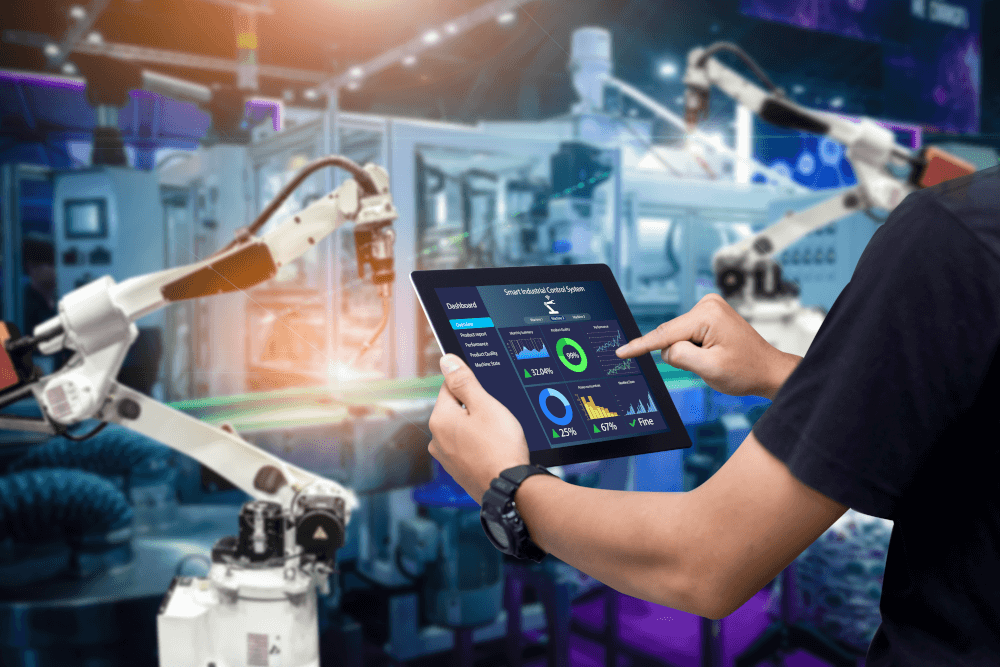 Do You Need Automation or Robotics in Your Company?

Firstly, if you’re working in a high-growth firm, you might be pondering if robotics or automation could be right for your business. If yes, then the following question in line is, “how could it be applied?”

Well, it all depends on your current business structure, and of course, its needs. To determine if robotics or automation is the right thing for your business, you must consider the following:

When you understand the concept of robotics vs. automation , as this is what this guide is all about, you will be better able to determine which of the two your factory or warehouse needs. Now, let’s look at the two terms in detail.

Robotics is an interdisciplinary division of science and engineering that includes computer science, electrical engineering, mechanical engineering, and others. It was initially introduced into General Motors in 1962 to perform repetitive tasks in manufacturing their vehicles.

Robotics basically deals with designing, building, operating, and using robots and computer systems to process information, control them, analyze data, and provide sensory feedback. In contrast, robots are a product of the field of robotics. Robots are physical machines with sensors, motors, and controllers that can be programmed to perform an array of physical tasks.

They’re fully designed to mimic human actions or assist the human works and perform a sequence of tasks semi-autonomously or independently. Actuators and sensors enable the robots to interact with the physical environment.

Moreover, robots are way more resourceful and multipurpose than single-function devices, as you can simply reprogram them. Consequently, everything that involves the use of physical robots can be referred to as robotics. Participatory robots are encoded to carry out tasks the same way human workers do.

Even though robots are typically immobile, they’re still at risk of crashing into humans or objects that walk into their workplace. If any probable impairment is detected, robots can use motion detectors or machine vision to stop for they are doing. This is why there is an escalating need for true cobots that can effectively collaborate with human employees.

Cobots are now capable of taking orders from people, including the ones that the initial programming of the robot didn’t foresee. Humans and robots will need to have a shared vocabulary for this, which might just be simple speech.

Initially, robots were created to handle mundane and monotonous tasks, such as building cars on a production line. But since then, they’ve expanded well beyond their common uses to carry out tasks like cleaning homes, fighting fires, and even assisting with complex surgeries.

Each robot comes with a different autonomy level, varying from human-controlled bots that perform tasks that human workers have complete control over to wholly autonomous bots that carry out tasks without any influence from the outside. While the general world of robotics continues to expand, there are some consistent characteristics in a robot:

Today, robots can perform a vast array of jobs within the workplaces such as:

Robots are frequently used to substitute human workers in dangerous workplaces and environments, including hazardous places, radioactive and high-temperature environments, and areas where there might be toxic gasses and vapors. The primary advantage of robots is their flexibility and adaptability.

They’re a well-known component when designing an automated system with diverse requirements/products. In addition, the integration of robots can be an incredibly inexpensive way to automate several tasks with many different variables that would otherwise require a highly specialist customized automated system.

Robots are found in all sizes and shapes and are known for efficiently carrying out the tasks for which they’re designed. All robots differ in terms of functionality, design, and level of autonomy. In general, there are 5 types of robots:

This robotic arm serves one function, i.e., to insert a specific part into the car’s engine, weld a door on, etc. Its job is to do that task faster, longer, and way more efficiently than human workers.

Autonomous robots work independently of human operators. They’re primarily designed to perform tasks in open environments that don’t need any human supervision. These robots are particularly unique in the sense that they use sensors to observe the world around them.

They then employ decision-making structures to take the best possible step based on their mission and data. Some examples of autonomous robots include medical assistant bots, autonomous drones, cleaning bots, hospitality bots, and lawn trimming bots.

Humanoid robots either look like humans or mimic human behavior. These robots typically do human-like activities, such as carrying objects, jumping, running, etc. They are often designed to look like human beings, even their faces, and expressions.

Augmenting robots either improve human competencies or swap the capabilities they have lost. Examples of present-day augmenting robots include exoskeletons or prosthetic limbs to lift heavyweights.

A classic example of a teleoperated robot would be drones used for detecting landmines on a battlefield or the human-controlled submarine used to fix the underwater pipe leakages during the BP oil spill.

The term automation became incredibly popular in 1947 when Ford began using its automation process model. The idea of automation transformed the way the processes were performed, and they manufactured cars.

In the modern-day era, automation refers to the use of machinery, computer software, or any other form of technology to perform tasks usually performed by human workers. The focus is on creating and applying these technologies to produce and deliver goods and/or services with minimal human intervention.

Implementing automation processes, techniques, and technologies improves the reliability, speed, and/or efficiency of several tasks that were once done by humans.

There are several different types of automation, ranging from simple to complex and from fully mechanical to entirely virtual. Automation is widely being used in various areas such as transport, operations, manufacturing, facilities, defense, utilities, and recently, information technology (IT).

The primary advantage of customized automation is that it can be custom-made precisely to a process in the most efficient way. This might frequently result in swifter production speeds and more effective solutions for repetitive tasks with less variation in requirements or products. Automation is divided into two categories: Industrial Automation and Software Automation.

If you have ever come across anything about automation on the internet, chances are it may have been about software automation, which is a computer program that is specifically programmed to perform repetitive actions using the same reasoning as human workers do while using computer applications.

For instance, GUI test automation is a technique of testing computer applications that entails capturing a person's activities while engaging with a graphical user interface. These activities can be repeated to independently test the program after some modifications have been implemented to the core software. Here are some of the most well-known forms of software automation:

BPA is the digitization of business operations aided by technology. It is performed in order to enhance service quality, keep your expenses in check, and accomplish digital transformation. It includes reorganizing human resources, integrating applications, and deploying software across the entire organization.

Despite its name, robotic process automation has very little to do with the use of real robots. In reality, it relates to using software robots or “bots,” which are pre-programmed scripts using computer programs just as human workers would.

They might not always complete the jobs in the most efficient way. Still, they’re comparatively easier to include in your current business processes. Moreover, you may deploy RPA in phases, yielding instant results.

Intelligent Process Automation is a branch of RPA that uses artificial intelligence to comprehend how human employees perform their jobs using a computer program. Like human beings, they deduce judgments based on previous occurrences, sentiments, or logic. Consequently, software robots can act a lot more smartly than the strict regulations of RPA.

There is a subtle difference between BPA and RPA. The former is like taking out your business’s entire human-operated manufacturing process and swapping it with a fully automated one, incorporating a robotic manufacturing comparison. On the other hand, RPA is much like attaching a collaborative robot (cobot) to one of the workstations in the manufacturing line.

Automation has significantly enhanced productivity and efficiency in the last few decades in several industries. As a result, this has resulted in reduced costs and saving time. From the simplest applications to the trickiest ones, automation can be observed in various forms in our daily life. Stated below are some popular examples of automation.

The Conceptual Differences between Robotics and Automation

The terms “robotics” and “automation” are often used interchangeably. Still, there are a few minor differences between both terms.

Quite evidently, there are some overlapping functions between automation and robotics. However, they aren’t the same. Robots are used to automate many manual tasks, especially in the manufacturing sector. It is worth noting that there are several types of automation that do not have anything to do with the use of physical robots.

Even though, in some instances, physical robots might be used in automation, most robots aren’t exactly created for this purpose. Similarly, there are several branches of robotics that don’t have anything to do with automation. Here are a few examples that better illustrate the difference between robotics and automation:

Suffice to say, not all kinds of automation incorporate robots, and neither are all robots designed for automation. With that said, most robots are used for that specific reason, particularly in the context of industrial use.

Automation or Robotics: Which Should You Choose For Your Business

Now that you’ve understood everything about automation and robotics, you might be wondering which one you need. This entirely depends on the process you wish to automate. You may use automation or robotics.

If there are barely even one or more tasks that are monotonous, mundane or cause a bottleneck, your company might be a good candidate for automation. When deciding whether you should invest in automation for your company, you must first consider the following:

Decide if you want to automation a specific part of your business.

Determine if a robot can carry out your physical processes or tasks.

However, since both automation and robotics developed in distinctive ways, it might often be necessary to use both for the optimum automation solution to be created.

Both automation and robotics are part of manufacturers' lives as they produce electronic appliances and devices to make our lives easier. The distinction between the two terms becomes relatively easy to comprehend if you consider how you automate your everyday lives, i.e., through software embedded in cell phones and other devices.

Unlike automation, which is part of our daily lives, robots are not. However, soon, robots will continue to get smarter, more energy-efficient, and more flexible, thanks to the advancements in these technologies.

They will also continue to be a central point in smart factories, where they will be able to take on more significant challenges and aid in securing international supply chains. Even though it is still considerably young, the robotics industry is filled with a commendable promise of development that science fiction could only dream about.

From the deepest depths of seas to thousands of miles in space, robots will be discovered performing jobs that human beings could not even dream of achieving on their own.